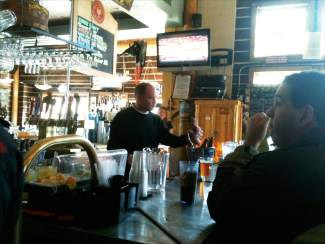 any of the restaurants in Keystone will open their doors a bit early for the summer season on Friday, June 5, for the inaugural Keystone Restaurant Week. More than a dozen locations will offer specials for $20.15 throughout the promotion, which ends Sunday, June 14.

“Restaurant Week gives locals an earlier start to the full dining offerings at Keystone Resort as summer activities heat up,” said Russell Carlton, senior communications coordinator for Keystone Resort. “With the variety of restaurants participating, guests can enjoy taking advantage of some great offerings at their favorite locations throughout Keystone while enjoying the warming weather.”

The event is a collaborative effort between the resort and Roadhouse Hospitality Group, operator of Zuma Roadhouse, Kickapoo Tavern and Luigi’s Pasta House in River Run Village, as well as other establishments throughout Keystone. P.J. Berg, director of staff development and business integrations for Roadhouse, said the specials are a bit different at each restaurant, which gives customers a lot of choices.

“At Kickapoo, they’re going to have punch cards for sale of beers, six beers for $20.15,” she said. “And five-wine punch cards — five glasses of house wine for $20.15 — that they can use throughout the year.”

Kickapoo also will have a lunch special, with two sandwiches or salads and two Coors Lights or two sodas for $20.15, and Chef Jeremy’s Dinner for two, a rotating menu that changes daily and includes two glasses of wine, beer or cocktails. Just down the way, Inxpot will be serving breakfast for two, with two breakfast sandwiches or burritos and two coffees, lattes or Irish coffees for $20.15, as well as a lunch special for two, with two sandwiches and two beers or glasses of wine.

Berg said she encourages Summit County residents to come out and support their local eating establishments, adding that it’s a fun way to get the community together.

“We are a resort community, but there’s a lot of people who live local, and the locals get out and support the locals, and the word gets spread out across town where the deals are,” she said. “You get a really good deal for really good food. And there’s fun to be had because the mountain is opening for the summer.”

For the duration of Keystone Restaurant Week, the resort will be collaborating with Roadhouse properties and other restaurants and retailers in River Run Village on a raffle benefitting the Keystone Science School. Each restaurant and participating merchant will be selling raffle tickets, with the winner receiving a fully loaded $500 grill package courtesy of Jack Daniel’s.

“The money raised by the Jack Daniel’s Grill Package raffle will help KSS share life-changing learning experiences with more students and teachers from around the country, as well as to serve our Summit County community through programs like the 4th Grade Astronomy program, CATCH Afterschool and so much more.”

Tickets are $1 each, and the prize includes a Jack Daniel’s-branded grill, apron, grill utensil set and barbecue sauce. The prize drawing will be held around 6 p.m. during the barbecue party at Kickapoo Tavern on Saturday, June 14, which starts at 3 p.m. The winner doesn’t need to be present to win but is responsible for collecting the prize.

“We are very excited to check out some deals at our favorite River Run restaurants and to thank the restaurants’ management and staff, as well as Keystone Resort, for everything they do for KSS and the Keystone community,” Reid said. “The barbecue at Kickapoo on Saturday, June 13, promises to be a great party. KSS will be there, so come by and say hi. There might even be a hot-pink gorilla sighting, who knows?”

For more information on Keystone Restaurant Week, including a full list of participating restaurants and their $20.15 specials, visit www.keystonerestaurantweek.com.